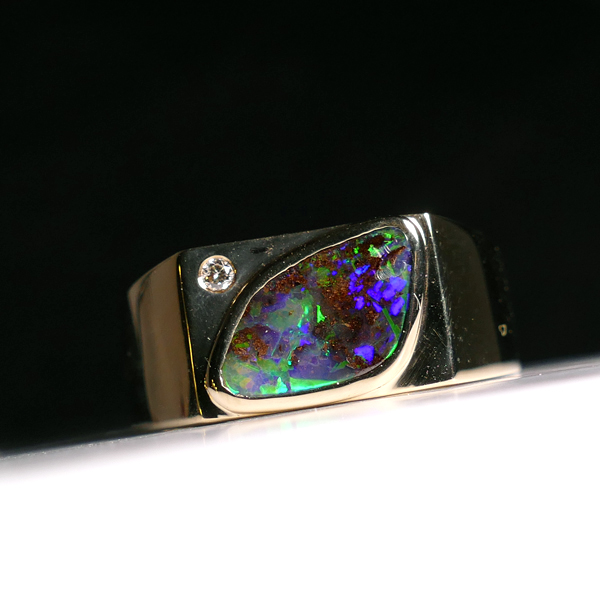 Since ancient times, rings have remained one of the most integral types of men’s jewellery. As icons of power, status, and wealth, men’s rings were an expression of their wearer’s most authentic self. Since then, not much has changed. Men’s rings remain not just an adornment, but a proclamation of personality and individualism. The most pervasive style of men’s rings, the signet, is more popular today than it ever has been, especially as a men's opal ring. This indicates that the desire to own an artistic representation of one’s being is showing no signs of waning.

Signet rings as they are now known first emerged in ancient Rome. They were crafted from iron until men of vast wealth began the enduring trend of forging rings from gold. The signet rings were engraved with a familial seal or crest, as well as iconography specific to the unique wearer. Alongside the family crest was often a monogram to indicate who the ring belonged to.

The signet rings were like the passports and business cards of the ancient world. Not only were they a primary method of identification, but symbols of trust and affiliation as well. If an emperor or senator needed business done on their behalf, they would have a messenger carry their personal ring to indicate that the transaction was genuine and fully authorised. In addition, all official correspondence of powerful men was sealed by dipping their ring in wax. While signatures were easy to forge, a ring, unless it had been stolen in secrecy, was almost impossible to copy. The rings were essential to stifling identity fraud and ensuring that the personal business of ancient government remained on a need-to-know basis.

Upon the original wearer’s death, the signet ring was bequeathed to whomever they had wanted to continue their legacy, such as a son or a trusted advisor. This trend was adopted and adapted in medieval England. Members of nobility would wear signet rings indicating their family, peerage, and status in society, while politicians bore rings displaying their dedication to a particular party. As time went on, the rings became as symbolic as they had been in ancient Rome, retaining their utilisation as forms of identification and importance.

Eventually, the ideology surrounding men’s rings trickled down into American culture. Without an official peerage system, rings were a method by which East Coast business magnates and their sons could allude to their vast wealth. Signet rings became extremely common amongst New England society, allowing the wearer to show off their family name, Ivy League alma mater, and social club or society.

Eventually, the ideology surrounding men’s rings trickled down into American culture. Without an official peerage system, rings were a method by which East Coast business magnates and their sons could allude to their vast wealth. Signet rings became extremely common amongst New England society, allowing the wearer to show off their family name, Ivy League alma mater, and social club or society.

After the Great Depression of the 1930s, mens rings became more readily available to lower classes, but still remained as IDs in one form or another. Upon high school or university graduation, the new graduate would receive a ring engraved with their school name and year of matriculation. Fraternities gifted rings with crests and Greek letters to initiated brothers as proof of their membership. These rings would often be proudly worn throughout a man’s whole life, and passed down to the next generation as a treasured heirloom.

With men across the world wearing rings for a variety of reasons, it was not long before jewellers began designing different styles of signet rings for their collections. With the plethora of design options now available, the opportunities for customisation became endless. In modern times, men’s rings are available in almost every type of metal and with almost every kind of gemstone - including opal.

In recent years, men’s opal rings have become a favourite of Australian jewellers and jewellery collectors alike. Men’s opal rings are masculine while still being artful and unique. With the range of colours that opals display, it is simple to choose the combination of hues that best conveys your personality - for example, greens and blues if you’re more calm and subdued, or fiery flashes of reds if you’re bold and outspoken. There are also the options to go minimal, with a simple opal in a silver band, or flashier, with a huge boulder opal set in gold alongside diamonds. Each men's opal ring, just like the signet rings that came before them, are completely one of a kind - just like the gentlemen who wears it.

If the last few centuries are anything to go by, men’s rings will remain not just a fashion statement, but an expression of individuality. Whether you are wearing your family crest or a design that is completely your own, you are becoming a part of a history that has been deeply rooted in civilization for thousands of years. If you’re not wearing an men’s opal ring - why not? You couldn’t make a “boulder” choice!