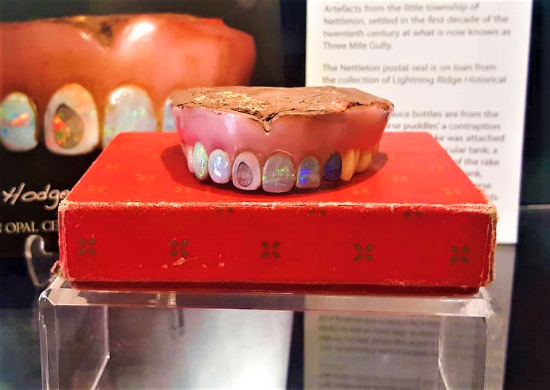 The famous town of Lightning Ridge is well known for a variety of reasons, most notably, the black opal trade. However, as anyone who has visited “The Ridge” can attest, the heart of the town is undoubtedly the band of colourful characters that make up its population. But none were more colourful, either literally or figuratively, than opal miner, butcher, and bookmaker Harold “Hodgie” Hodges.

Hodges, a veteran of both World Wars, arrived at Lightning Ridge in the late 1950s. Like many others, he dreamed of making a fortune off of a jackpot of opal. But, as opal mining is an arduous, and often disappointing, endeavour, Hodges supplemented his passion by tapping into his entrepreneurial spirit. In addition to being The Ridges’ resident butcher and bookmaker, Hodges was also a renowned hotelier. In the early 1960s, he opened the “Tram-O-Tel”, a motel consisting entirely of retired street cars from Melbourne and Sydney, which is still in operation today.

Despite his many achievements, Harold Hodges' true legacy can be found on display at the Australian Opal Centre in Lightning Ridge. If you’ve been to the opal centre, you’ve surely seen Hodgie’s opal dentures smiling up at you from postcards, books, and the incredible mural at the entrance to the showroom. As the first pair of opalised dentures in the world, the oddity has developed a cult status, and has attracted hundreds of visitors to the opal centre. But where, and more importantly, why, did Hodges get the idea to replace his missing front teeth with gems?

In the words of Hodgie himself, “I needed a new set, so I got ‘em made from opal, just for the hell of it. Chomped marvellously well, too.” An April 27, 1967 ABC news article corroborates his story. In the article, Hodges’ friend, dentist Geoff Brown, explained that Hodges was on a trip to Sydney when he lost his original front plate of false teeth. Harold sought the help of Dr. Brown at his practice in Parkes, NSW, their hometown. From a collection of opals that Hodges had brought from Lightning Ridge, the two selected six stones to set into a new pair of dentures. Hodges polished the opals, which Dr. Brown and his associate, Mike Richardson, cut and shaped into teeth using professional dental tools.

Hodges specifically chose a range of opals that displayed every colour of the rainbow. Five are light opals, and one is blue-black. The opals have an assortment of different patterns, including flash, ribbon, pinfire, and kernel, which is when a secondary opal forms in a cavity of a host opal. All together, the dentures were originally valued at $250 AUD. Dr. Brown greatly disliked the dentures, calling them “ghastly” and “party teeth”. Hodges, however, was an immediate fan. When the dentures arrived at his hotel in Parkes, Hodgie moistened them in his pint of beer before popping them into his mouth.

When Hodges debuted his new dentures on April 25, 1967 at an ANZAC Day dinner at the Lightning Ridge Opal Centre, they were a hit with his neighbours and friends as well. It wasn’t long before word spread, and Hodgie unwillingly became a tourist attraction in his own right. Visitors to Lightning Ridge would gather at the town pub, Digger’s Rest, to try and catch a glimpse of Hodges’ grin. As much as Hodges liked his teeth, he didn’t quite enjoy their celebrity status. In 1977, after a decade of wear, Hodges took out his teeth for the last time, saying, “I got sick and tired of the tourists tearing up and asking to see my fangs. ‘Please smile, Harold!’ Click, they’d snap a shot. Well, there I was, smiling all day long for these goons, even when I had a hangover and felt like crying. So I gave them to the pub where the tourists can see them without bothering me.”

Hodges had his dentures encased in the wall of the Digger’s Rest, where they remained until his death in 1983. Afterwards, his wife, Debbie had them removed so that she could keep them at her home. The dentures would not be seen again in public for over twenty years. There were several conspiracies and myths about where the teeth may have been kept hidden, but none were true. After Debbie Hodges passed, the dentures were inherited by her and Harold’s dear friends, Helen and Kevin “Shorty” Williams. In 2009, Helen and Shorty decided that it was time for the dentures to make their way back into the public domain. They were donated to the Australian Opal Centre, where they became the hero piece of the permanent collection.

The Legacy of Harold Hodges

In the years since, the dentures have become an Australian icon. Despite the rumours, it has been confirmed by the Australian Opal Centre that they are Harold Hodges' original dentures, if not the original set of opals. All of the opals except for one were replaced by Harold during his lifetime with the help of his cutter friend, Ernie Dalhoma, who would shape new stones into misshapen teeth and stick them back in with industrial strength glue. Each replacement opal is just another chapter in an almost unbelievable story. The dentures are now all that remain of two Lightning Ridge institutions: Harold Hodges, and Digger’s Rest, which tragically burned down in 2006.

But the legacy of Hodges’ teeth lives on in Lightning Ridge. The Australian Opal Centre has named its popular newsletter “Harold Hodges’ Opal Teeth”. Some members of the Lightning Ridge Historical Society are part of a group called the “Opal Teeth Club”, in which all members have a single, opal tooth in honor of Hodgie. Undoubtedly, the dentures will play a huge role in the branding of the new opal centre, which is currently under construction in The Ridge. Until then, the false teeth will remain on display at the old location, where they can be visited year round. Stop by and share a smile with Hodgie… and maybe a pint or two in his honour while you’re at it.

Special thanks to Susie Webster at the Brisbane Opal Museum