Who Is HW Bond?

In 1875, HW Bond would take the marketing of Australian opal abroad to unforeseen heights. Bond, a drover from Toowoomba, QLD, was introduced into opal mining purely by chance. He claims that, one day, while he was driving cattle by Cooper’s Creek, he happened upon another man tending to cattle. The two struck up a conversation, and the man invited Bond to his home to show him a peculiar find that he had stumbled upon in the days previously. In a rubbish bag, the man had collected thirty pounds of matrix opal, which he had discovered weathered and broken apart in some tall grass. Being aware of an opal mine in nearby Blackall, Bond purchased the parcel for £300 and asked the man to give him directions to the exact place where he had discovered the stones. Almost immediately, he leased the land at Cooper’s Creek and opened the first of his three opal mines. 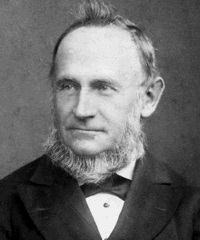 Tonnes of opal were mined by Bond’s men at Cooper’s Creek. Armed with a variety of his finest specimens, Bond set out to find an investor. Through his network of contacts in the Methodist church, Bond met Sydney mining and manufacturing magnate Ebenezer Vickery. Impressed by both Bond and his opal, Vickery agreed to become co-owner of Bond’s leases. However, he requested that any opal mined at the leases be taken to London for professional cutting and polishing. Thus, in 1883, Bond left for England to hand deliver the raw opal specimens.

In December 1885, Bond submitted 4,000 carats of opal for display at the 1886 Colonial and Indian Exhibition. Once it was selected for showing, Bond packed up his young family and made the permanent move to London, arriving just before the exhibition began. Bond’s opal, with its magnificent flashes of blue, green, and red, were extremely successful and drew in crowds of hundreds. It was lauded by British mineralogists as being far finer than the more commonly known Slovakian white opal and Mexican fire opal, particularly in terms of brightness and play-of-colour. The now London-based Bond seized on the opportunity to leverage his newfound fame as quickly as possible. The finest of his opal specimens, set in a gold necklace and rimmed with diamonds, was gifted to Alexandra, Princess of Wales. The necklace was said to be worth £6000 (nearly $1,500,000 AUD in today’s money). The princess was so taken with her new jewellery that she debuted it at a party soon after. Her mother-in-law, Queen Victoria, upon witnessing the incredible necklace, had her interest piqued. On December 1st, 1887, the Queen invited Bond to Windsor for a private meeting, where she selected a variety of his opals to be made into jewellery. When word spread of Bond’s professional relationship with the royal family, both British and Australian press dubbed him the “King of Opal”. Soon after, Australian opal became the most popular accessory in the British empire.

Bond invested £100,000 into a new company, “Opal Mines of Queensland”, and opened up offices on Waterloo Road. His success, however, was to be short-lived. At the beginning of the 1890s, Bond ran into various hardships, including a financial scandal involving one of his businesses, as well as an Australian banking crisis. By 1892, Opal Mines of Queensland had gone bankrupt, and Bond, now ruined, returned to Toowoomba. This left the market wide open for a new opal king - a mantle which would be taken up by Tullie “TC” Wollaston.