The Opal Fossils of Fostoria dhimbangunmal 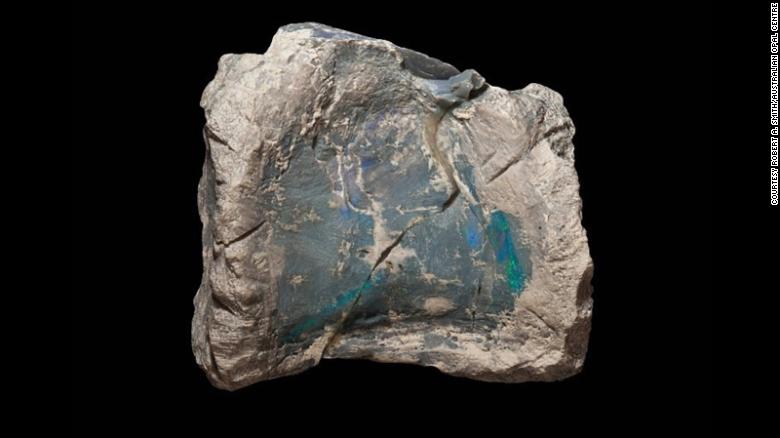 One of the Unearthed Fostoria Fossils

100 million years ago, Australia was very different to how we know it today. As a part of a lush supercontinent called Gondwana, Australia was home to thousands of different species of plants, animals, and dinosaurs. But it was not just the surface of Gondwana that was teeming with activity. Deep below the ground, the conditions that lead to the formation of opal were beginning to take place. In the many millennia following the Cretaceous Era, these two worlds, above and below, would combine in the most magnificent way. The results are opalised dinosaur bone fossils, a truly unbelievable relic of the past.

In Australia, opal fossils are not uncommon. Across the opal fields at Lightning Ridge and Coober Pedy, the opal fossils of clams, molluscs, crustaceans, and ancient marine mammals have all been uncovered. These opal fossils form in a similar manner to regular fossils. Hundreds of millions of years ago, prehistoric animal material turned to stone after many years underneath folds of sandstone and clay. The silica gel that hardens into precious opal seeped into cracks in the organic material before it had fully decomposed. When this phenomenon occurred, the inside anatomy of the prehistoric animal became an opal fossil. If the opalised sections of the fossil are transparent enough to see through, the internal anatomy of species that have been extinct for centuries can be studied by scientists. Another way that opal fossils are formed is by the replacement of the original mineral's molecules with another type of mineral's molecules, in this case, silica.

In modern times, the excavation of an opalised toe bone at Winton and an opalised jawbone at Lightning Ridge has led to the discovery of a couple of new species of dinosaurs native to Gondwana. But in 1984, one of the most important scientific discoveries of all time thrust the opal fossils of dinosaurs into the international spotlight. This discovery was of the opalised bones of Fostoria dhimbangunmal.

In the mid 1980s, opal miner Bob Foster was living and working with his family in Lightning Ridge. Foster was desperate for opal, but all he was finding were piles and piles of "useless" dinosaur bones. Often, Foster would smash the bones open to see if there was any precious opal inside. By 1984, Foster had collected so many bones that he decided to take suitcases full of fossils from their home in his living room to the Australian Museum in Sydney.

After viewing the fossils, museum curator Alex Ritchie immediately knew that he had to send a team of professionals out to Foster's Lighting Ridge mining sight, nicknamed "Sheepyard". At the site, nearly 60 more bones were dug up. While the fossils were mostly covered in potch, or common opal, there were also seams of magnificent blue black and ingigo opal, sometimes flecked with brilliant flashes of green. Although potch may not look like what is typically thought of as opal, the gray-ish white colour is what is typical of 90% of opal. The difference between potch and precious opal is the size of the silica particles that make up the opal. When the sizes of the silica spheres are not uniform in size, the result is potch. When the silica spheres are uniform in size, the light refracts off of them at an angle which gives the appearance of flashes of colour to the naked eye.

The dinosaur bones were taken back to the Australian Museum, where they would remain for 20 years. During that time, they were looked at more so as curiosities, never being analysed or reassembled by professionals. In 2004, Bob Foster made the decision to bring his once-in-a-lifetime find back home to Lightning Ridge. There, the bones were acquisitioned by the Australian Opal Centre. But it would not be until 2019 that a complete study of the bone collection was undertaken by Dr. Phil Bell and published in the Journal of Vertebrate Palaeontology. The findings would go on to change the face of Oceanic palaeontology forever.

The collection of over 60 bones, the most opalised bones ever found at one site, revealed a brand new species of Iguanodon. Iguanodons were mid-sized, bilateral (two-legged) herbivores that travelled in herds. The species was given the official name of Fostoria, after Bob Foster, dhimbangunmal, which means "sheepyard" in the language of the Yuwaalaraay people, the traditional owners of the lands surrounding Lightning Ridge.

Fostoria was just one of 10 fossilised dinosaur skeletons ever unearthed in Australia. Many of these fossils were stumbled upon by opal miners like Bob Foster during their digs. But while all of those accidental finds had been bones from singular dinosaurs, the fossilised remains of Fostoria proved to be a herd of four Iguanodons: 1 adult and 3 youths. Bell made this incredible realisation by noticing duplicates of certain bones during their CT scan. This is the only herd of dinosaurs ever found on the continent, and indicates that the Fostoria would travel in packs for safety and protection.

The presence of herbivores in Lightning Ridge indicates how different the arid topography of Lightning Ridge was in the Cretaceous Era compared to now. To sustain this type of life, as well as to create an environment conducive to the formation of opalised fossils, there would have to have been acres of forestry and multiple bodies of water. Having this information is key for scientists attempting to piece together what Earth was like millions of years ago, and what types of flora and fauna thrived in Gondwana.

While opals are beautiful to look at, that is not the only reason why they are Australia's national gemstone. Opals, whether in gemstone or fossilised form, are an astounding window into all the life that once walked on the same land that we live on today. The discovery of Fostoria dhimbangunmal is just the beginning of palaeontology's incredible journey into the past, which will change the way the whole of civilisation perceives our natural environment. Next time you hold an opal, take a second to appreciate all it has seen and experienced, and all we have yet to learn.

Robert A. Smith (Australian Opal Centre). "One of the fossil vertebrae of Fostoria". [online] Available at: https://edition.cnn.com/2019/06/04/world/dinosaur-species-opal-trnd-scn/index.html. [Accessed 21 May 2021].